The compact crossover market was crowded in 2017 when Mitsubishi introduced its brand new Eclipse Cross model.

So it decided to build it as a crossover compact coupe.

In 2017 Mitsubishi Motors was struggling to survive on the market. With most of its range aged or outdated, the only vehicles that were still on demand were the Outlander Plug-in Hybrid and the L200. But those two couldn't make it into high volumes and the small-class Space Star was not the hit the manufacturer hoped for.

The SUV-coupe segment was highly contested by premium car-manufacturers. But for more affordable vehicles, there was nothing on the table. With its striking front fascia, resembling a sports car and a high ground clearance typical for an SUV, the Eclipse Cross seemed to satisfy both worlds. The sloped roofline and raked rear end confirmed the coupe-like silhouette. In the rear, a roof spoiler and a small lip on the half-way of the liftgate amplified the sporty image.

Inside, the infotainment unit was neatly placed on top of the dashboard, and it could have been accessed via a 7” touchscreen monitor or a touchpad between the front seats. It was Android Auto and Apple CarPlay compatible. In the rear, the seats were sliding and reclining, allowing more legroom or more trunk space. The backseat was folding in a split 60:40 ratio. 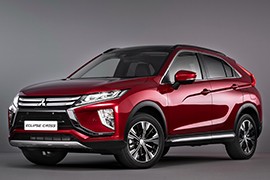