Mitsubishi introduced a facelifted version for the ASX/RVR/Outlander Sport lineup in 2016 and brought a refreshed design and improved engines.

The Japanese carmaker went through some significant changes after Nissan bought Mitsubishi in May 2016. But the three-diamond carmaker already had the facelift planned, and things went smoothly to that point. Also, the facelifted version kept the ASX sales high, but not as good as before. It only slowed down the sales drop.

On the outside, the ASX received a new front fascia with an entirely different bumper. A set of chromed trims flanked the black grille and emphasized the side scoops which hosted the fog lights. Mitsubishi also mounted a plastic silver shield at the bottom of the bumper, inspired by its bigger brother, the Outlander.

Mitsubishi also revised the interior and introduced new satin-silver trims around the center stack's air vents and a piano-black panel. An improved infotainment system with a 6.1" touch-screen replaced the previous unit. There were also new upholstery options, including one with diamond stitching for seats. In the back, the carmaker kept the 60/40 split-folding backrest that increased the trunk from 393 liters (13.9 cu-ft) to 1,143 liters (40.4 cu-ft).

For selected markets, Mitsubishi installed a 2.4-liter gasoline engine that offered 166 hp. The rest of the world received the same 1.6-liter gasoline unit and a PSA-sourced 2.2-liter turbo-diesel, which replaced the older 1.8-liter oil-burner, but produced the same 150 hp. 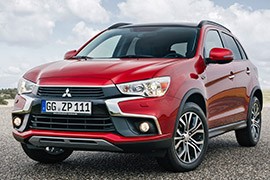