Mitsubishi introduced the first generation of the ASX on the market in 2010 and didn't wait too long to refresh its image.

The car was not old yet, but Mitsubishi tried to stay ahead of the pack and introduced a refreshed version for the sporty-looking crossover vehicle in 2012. The carmaker named-it ASX on some markets and RVR on others. As a result, it was the first-generation of the ASX or the third generation of the RVR.

Mitsubishi designers desperately tried to obtain a better look for the unusual looking car and introduced a new bumper design. The broader opening in the lower apron and the reshaped fog lights made the car looks sportier. Also, the grille was different and A-shaped with a 3D pattern mesh. A new set of 18" alloys became standard for the 2013 model.

Inside, the Japanese carmaker installed a Lancer-Evolution inspired steering wheel with aluminum accents. For versions fitted with an automatic transmission, the Mitsubishi installed paddle shifters behind the steering wheel. The infotainment system was fitted as an option on the base trim-levels and standard for the top ones.

Under the hood, Mitsubishi kept the 1.6-liter engine as its sole gasoline unit. Depending on the market, it introduced other diesel engines, including the 2.2-liter developed with PSA. The automatic transmission was a CVT that offered the possibility of selecting six fix ratios via paddles, mostly for engine braking. 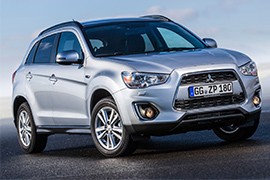