The 2010 Mitsubishi ASX was the right car at the right moment in the right market. It was launched just in time when the cross-over market started to grow.

There are not too many car-manufacturers that won the famous Paris-Dakar rally-raid and also won the World Rally Championship. Based on that experience, the Japanese car-manufacture decided to launch is small cross-over ASX on the market to improve its struggling sales.

It had the famous Mitsubishi Lancer trapezoidal front grille, but taller. The angled headlights were also inspired by the same car. The short vehicle had the proper SUV stance, even if it was reduced in size.

For the interior, the experience in both car and off-road vehicles could be seen. There was seating for five adults, with a low center transmission tunnel and enough room for all passengers. The trunk was large and when folded down the rear seats, it created a flat platform. The instrument cluster featured two round dials, in binocular style, with a small LCD between them.

For the engine offer, there was a choice for six gasoline and three turbodiesel units, depending on the market. It was offered with a front-wheel-drive or all-wheel-drive system. Depending on the engine, the standard transmission was a 5- or 6-speed gearbox. A 6-speed automatic and a CVT were offered as an option. 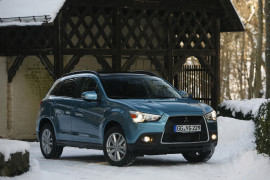