Nobody buys a MINI for its practicality.

The MINI is a statement for fashion, for design, and, depending on the version, for a sporty character.

Since it was acquired by BMW in 1994 along with the Rover Group, the Mini launched three generations of the MINI hatchback. And it kept growing ever since in size and engines. The third generation offered a wide variety of options and, somehow, it lost its initial sporty spirit. But it gained its place in the premium small-car segment.

The 2018 MINI was not quite a MINI anymore. It grew so much that it could be called a Maxi-MINI. But still, it has the same character on design, with its specific old-school grille and round headlights. It had some nice details and that continued inside the car, as well.

The dashboard is unique on the market, with a big round display for the infotainment system in the middle of the center console and few more dials in front of the driver. There are some other items inside that are specific to the MINI. For instance, the start button was placed on the center console, under the big round infotainment unit and it looked like it belonged into an aircraft.

For the engine choices, the 2018 MINI was available with diesel and gasoline engines, with three or four cylinders, and all of them were turbocharged. 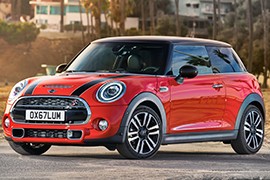