It was the last stint for the original Mini designed by Sir Alec Issigonis, and despite its age, it was still a fun car and loved by their owners, as long as they were not tall.

When it designed the Mini back in the early '60s, nobody could tell that the tiny car would have such a success. From time to time, the British carmaker, which traded hands several times, included few updates until 1997 when the last series saw the broad of light.

On the outside, it was almost the same MINI as before. It showed the same very short front area with a straight-up fascia that sported a pair of round headlights and a chromed grille. A set of additional fog lights (or two sets) was on the options list, especially for the Cooper S version. From its sides, the enlarged wheel-arches featured plastic molds to cover the wider 13" light-alloy wheels. Despite the new regulations, the carmakers didn't fit plastic bumpers and still relied on the same metallic, chrome-plated ones.

Inside, it was room for four adults, by the '60s standards. But it was less roomy than someone would think. Its low-mounted seats made it possible even for six-footers (1.82 m) occupants to fit inside, at least for short distances. From 1997, the carmaker added steel beams inside the doors to enhance protection. For the same reason, MINI introduced a driver airbag in the steering wheel.

The carmaker installed a 1.3-liter engine with two injection ports that led to 63 hp under the hood. It was paired to a four-speed manual gearbox, which sent the power to the front wheels. 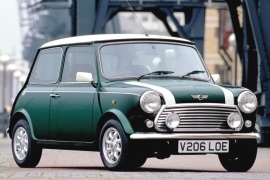