The MINI was not that small anymore and the customers always asked for more.

And the Countryman version was just about what some of them asked: a small crossover vehicle.

After it was kept by BMW to represent them in the small-size premium segment, the MINI brand started to pick-up speed. At first, it was just another small-size vehicle, with a Chrysler engine in it. Then, it was powered by BMW-PSA jointly developed units. After that, the all-wheel-drive came into the equation and the MINI became a crossover.

It was taller, longer, and roomier than its stablemates. It featured new headlights and black molds on the wheel-arches to emphasize the off-road look. It wasn't an off-road vehicle though, but it mimicked one. The tailgate was curved and vertical. Since the car proved to be successful on the U.S. market, the car-maker mounted the rear lights on the fixed rear quarter panels.

Inside, the MINI Countryman offered room for four adults, with easy access through the rear doors. In the back, there was a bigger luggage compartment and, if there was more room needed, the rear seatback could have been folded completely or just in a split way. The only problem for the rear passengers was the transmission tunnel. Other than that, it offered a decent amount of legroom and headroom. 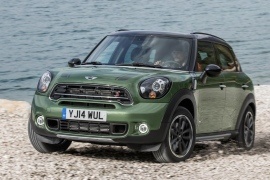