MINI started the 2021 year in full blast introducing a new generation for its lineup and came with an S-version as well for the entire range.

Building a convertible was a must for MINI. It always had one on its lineup, and the 2021 range came with one as well. Unlike some of its previous generations, it came right from the start with the S-version, which means that the open-top small vehicle was able to punch and offer some good sensations behind the wheel.

From the outside, the new MINI Cooper Convertible shared the same front fascia with the rest of the range with the specific Cooper S air-scoops for that version. That included the piano-black trim around the grille and the horizontal bar for the license plate. It even sported that slat even for the U.S. market, where it was not required. But the carmaker added it anyway. Its strong, thick, slightly raked A-pillars served as safety arches. Unlike some of its predecessors, it didn't feature any other visible roll-over protection behind the rear seats. Instead, it showed the retractable roof, which couldn't be completely hidden behind the cabin.

Inside, the Cooper Convertible received a 5" instrument cluster fitted as standard. An 8.8" touch-screen dominated the center stack's top. MINI installed sport-bucket seats with high-bolstering for the sportier versions. The carmaker kept the same design for the steering wheel with three thick spokes and added buttons on the horizontal ones. Like on its predecessors, to access the rear seats, the front ones had to be tilted and slid forward. At least, there was no roof above to make the access difficult. 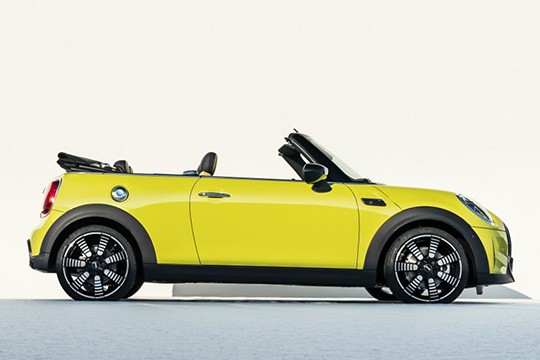 2 MINI Stops Making Vehicles With Manual Transmissions, Might Not Offer Them Again