After BMW sold the MG-Rover to Phoenix Consortium, the British carmaker tried to flex its muscles and showed what it could do without the mandatory restrictions from a giant carmaker.

In 2001, MG introduced the ZT model and its station wagon sibling, the ZT-T. Both vehicles relied on the same platform built by Rover for the 75 series. But MG was known for its motorsport heritage and aimed to become Rover's performance division. In 2003, the ZT-T became the fastest production station wagon globally, after it reached 225.6 mph (363 kph) at the Bonneville Speed Week on the Salt Flats in Utah – U.S.A.

The ZT-T exterior featured the same dual-headlamps design system from the Rover 75, but with a wider, lower, plastic bumper which sported a broad grille on the apron. Its mesh-grille design resembled the look of older race cars. From its sides, the ZT-T sported new alloy wheels and featured a roofline extended above the trunk area, with a roof spoiler on the upper part of the tailgate. At the back, the carmaker installed a side twin exhaust with a heat shield between the pipes and the plastic bumper.

Inside, the sport bucket seats looked sportier than those offered by Rover for the 75. Its instrument panel featured four elliptic analog dials with white background and red needles, while a small LCD revealed data from the onboard computer. In the back, the carmaker installed a three-seat bench with a split-folding seatback which increased the trunk space from 400 liters (14.1 cu-ft) up to 1,222 liters 43.1 cu-ft).

Under the hood, MG installed a choice of three engines ranging between a 2.0-liter turbodiesel that provided 131 hp and a 2.5-liter V-6 that offered 190 hp with the five-speed manual gearbox and 180 hp with a five-speed automatic. 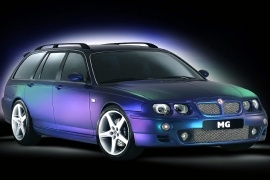