MG refreshed the ZT range in 2004 in a final attempt to make it a more desirable car on the market and upgraded the engines.

After three years on the market, MG tried to make the ZT more appealing to its customers. The sales were slow, and the customers were not that happy with that model. Rover initially developed the car under BMW ownership. After it separated from the German carmaker, the small British company struggled to survive, and it just didn't have enough money to make a significant change.

On the facelifted version, the carmaker introduced a new front fascia. Its formerly used double headlamps system was dropped and replaced by single units, clear-lens, headlights. The bumper had to be changed to match their new design, but there were just slight differences. At the back, the carmaker moved the badge from the right to the center-bottom area.

The interior lost the ambiance of a British saloon when the carmaker removed the wood-veneers from the dashboard, door panels, and center stack. It replaced them with black plastic panels, which looked cheap. In the instrument panel, the dials were back-lightened in an electro-luminescent blue glow. Its front bucket seats offered good bolstering on the sides since MG tuned the car for sportier drivers.

Under the hood, MG ZT offered a choice of four gasoline engines and one turbo-diesel. The latest addition was the 4.7-liter Ford V-8 engine, which sent the power to the rear wheels. All other engine versions were front-wheel-drive only. MG stiffened the suspension for the ZT by 70% when compared to its sibling, the Rover 75. 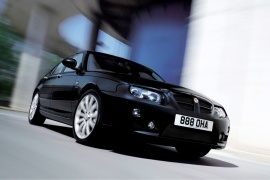