After BMW sold MG Rover group for 10 GBP in May 2000, the new owner decided to use the Rover 75 as a platform for an upscale, sportier model, and thus the MG ZT was born.

It wasn't just a trim level for the 75 but differed in many ways from its sibling. Phoenix Consortium, the company that acquired MG Rover, thought that the sporty brand deserved more than just a different label on the trunk and new bumpers.

Thus, the MG ZT featured a slightly modified front fascia. It still featured the same quad-headlights system, but it sported a redesigned bumper with a lower apron that hosted a mesh grille flanked by round foglamps. From its profile, the lowered suspension and the unique, multi-spoke alloy wheels warned about the car's sporty character. To top it all off, at the back, the ZT received a wing on the trunk and metallic trim around the dual-exhaust pipes placed underneath the redesigned rear bumper.

Inside, the customers could find a better interior than on most of the Rover models. The high-bolstered bucket seats at the front, the three-spoke steering wheel, and the carbon fiber trim offered an upscale look for the car. At the back, the bench was profiled for two, although there was enough room for a third child seat in the middle.

MG Rover decided to start the ZT range with only one engine, a 2.5-liter, Rover-sourced V6-mill. It provided 160 hp (162 PS) with an option for a pumped-up version that sent 190 ponies to the front wheels. Later on, the carmaker added other engines to the offer. Even though it was not the success that Phoenix Consortium hoped for, it still helped the group to sell 170,000 units in 2001, the brand's best-selling year. 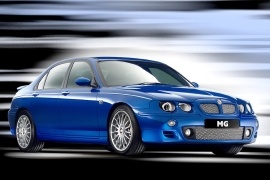