The MG ZS was the tuned version of the Rover 45, a car that shared its underpinnings with the Honda Concerto.

It was developed and launched soon after BMW sold Rover in 2000.

The cooperation between Honda and Rover didn't last too long. But it was long enough so the two car-makers could develop some interesting cars together. The Honda Concerto/Civic and the Rover 400/45 was just an example of a good marriage. But after BMW bought the majority stakes in Rover Group from the British Aerospace in January 1994, the Japanese company slowly pulled out from Rover in 1995 after 20 years of cooperation. Then, in 2000, BMW sold Rover and Land Rover brands. The British company was on its own.

The MG ZS looked like a boy-racer dream but built in a factory, not in a garage. Over the simple body of a Rover 45 sedan, it installed a new front bumper, side sills, and a big wing in the back. A set of 17” light-alloy wheels was installed. The octagonal MG badge was pinned to the hood and that was the exterior of the ZS.

Inside, there were more tuning-fashion items such as the silver background for the dials and red needles. The sport-bucket seats featured two-tone color upholstery, where one of the colors was the car's body color. That won on the coolness factor.

For the mechanical part, a stiffer suspension was a good improvement. For the engine compartment, the ZS was available with the same engine as the Rover 45, plus something more: a 2.5-liter V6 engine taken from the Land Rover Freelander. It was a quick and appreciated car on the market and, mated to a 5-speed manual, it could top the 0-60 mph (0-97 kph) run in 7.3 seconds. 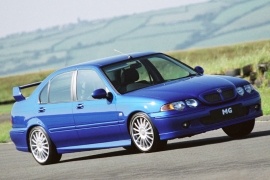