The medium-sized SUV from MG was launched in 2017 in the UK.

A year before it was shown in Shanghai Auto Motor Show. It is positioned lower than GS and has an electric version, which will be sold in the UK and some other countries in Asia, with right-hand drive.

The look is inspired by the Roewe RX3 and shares the same technical platform. Some design cues were carried over from the Chinese sibling but still tries to carry on the British design legacy. They didn't do it too well since the name ZS was used for a compact-class sedan with bold engines. Dimensions are in the sub-compact range with a length of 4.3m (169.8 in) and a width of 1.8 m (71.2 in). Since they kept the original ZS range class of vehicles, they installed new small engines and even an electric version. Thus, ZS became the first Chinese SUV with an electric engine that is sold in Europe.

Inside the cabin, the car has some good things to offer. There is not plenty of room, but it is enough for four adults. The infotainment system supports Android Auto and Apple CarPlay. The trunk can accommodate 448 liters (15.8 cu-ft) of luggage. 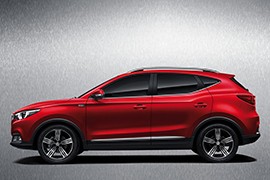