The MG ZR was a compact vehicle introduced in 2001 by the MG Rover Group.

The hot-hatch was actually a badge-engineered Rover 25 that suffered few changes such as an improved suspension and a more attractive exterior and interior design.

The attractive ZR was built in 3- and 5-door body styles, available with a variety of engines and trim levels.

In 2004, MG decided to update the small sporty car along with the rest of the vehicles in the range.

With the new exterior design changes, the ZR was no longer that similar to the Rover 25.

Inside, the revised interior design was more appealing than before. The new dash design incorporated the climate controls on some models and the cloth upholstery was refreshed.

Aside from the mentioned improvements, the ZR remained the same agile, aggressive looking pocket-rocket with a precise steering and great stability in turns.

The facelifted ZR should have been given an award for the shortest life in the automotive history, as its production ceased on its 1 year birthday.
The MG Rover Group went bankrupt in April 2005, just when the carmaker was about to release a new model to replace the ZR. 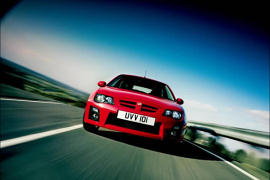