MG understood back in the early 2000s that the market for five-door hot hatches might be even bigger than the one for the three-door version and offered its ZR model with a set of doors for the rear passengers.

After it was sold by BMW to Phoenix Consortium, the British brand MG tried to survive in a grueling market with niche vehicles addressed to those who were still young at heart. The five-door version targeted customers who needed a rear bench and a pair of doors for it, and the idea was good.

The MG ZR begged for attention with its quad-headlight design. Its mesh grille was surrounded by body-colored trims, and the lower bumper received similar treatment for the air intake. While the front looked just like the one from the three-door version, the profile was different due to the number of doors. The carmaker didn't try to hide that with blackened B-pillars as other carmakers did. But, just like its three-door sibling, it featured an oversized roof spoiler at the back, on the upper side of the tailgate.

Inside, MG placed body-colored trims on the dashboard and door cards. Inside the instrument cluster, the white dials with red needles emphasized the car's sporty character. Also, the driver benefited from a three-spoke, two-tone steering wheel and a set of aluminum pedals. Moreover, the carmaker placed a set of high-bolstered seats at the front while a regular Rover 25 bench was installed in the back. Still, it used a specific upholstery that matched the car's color. 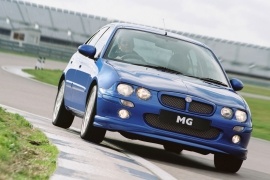