The MG XPower was a sports car produced by the MG Rover company.

Launched shortly after the Rover group was sold to a Chinese conglomerate, the MG-X Power SV (Sport Veloce) came as a complete surprise, especially for former parent-company BMW who, if statements are to be taken for granted, had no idea of such a development. The purpose of the car was to revive the brand, and while it was not the most beautiful car, it definitely looked different from the contemporary sports cars launched at the time, plus, its power was impressive.

It was assembled in Modena, Italy, by Vaccari & Bosi, and the car shared the platform of the Qvale Mangust, previously known as De Tomaso Bigua. Tested during various TV shows, including the famed Top Gear, the car was deemed as a poorly comfortable and fairly noisy car but undoubtedly offering a surprisingly fast ride. Thrill seekers may find the car's power plant much to their liking since the XPower boasted a 4.6 L Ford Modular V8 with an output of 320 hp. The car’s performance was further enhanced by large sports wheels, specially tuned suspension and light weight carbon-fiber construction.

MG claimed that the sports car reached 60 mph in 5.3 seconds and had a maximum top speed of 165 mph. A more powerful version was offered, with the engine developing 410 hp, however, both versions were limited to 195 mph. 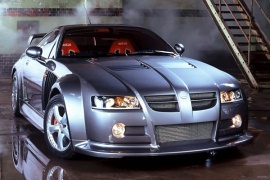