The MG brand was founded in 1920, but in 2006 the name and the badge were bought by the Chinese company SAIC (Shanghai Automotive Industry Corporation).

In 2009, SAIC introduced the first product developed in-house, the MG6. It was available as a hatchback and as a four-door sedan. Two years later, the MG6 was introduced to the British market. Underneath the surface, the car was not completely new. It had the former MG75 front subframe and an engine based on the former Rover K-series.

The design was a bit bland for those times, with a grille that didn't resembled the MG brand, apart from the octagonal badge. The headlights were curved and side-extended with the turn-signals. The curved shape of the greenhouse left the image of a sporty sedan.

Inside, the MG6 was fitted as standard with everything that the brand had in its warehouse. The infotainment unit screen was nicely integrated into the dashboard, under the same cluster with the analog gauges. The navigation system was standard as well. Thanks to its 2.7 m (106.5”) wheelbase, there was enough room for five adults in the car, with more headroom for the 5-door sedan version.

At the time of the launch, the only available engine was a 1.8-liter turbocharged gasoline unit, mated to a 5-speed manual. In 2012, a Fiat-sourced 1.9-liter JTD was introduced and it was mated to a 6-speed manual. No automatic option was available for the British market. 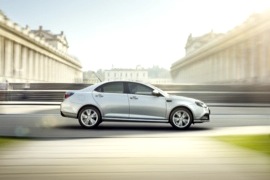