MG was raised as a sports car manufacturer, but those days were already gone when the British brand was acquired by Nanjing Automobile Group in 2006 and turned into a brand mostly oriented towards mass-market.

The Chinese carmaker knew that there would be a high demand for mass-produced electric cars. So, after developing a dedicated platform for more vehicles, it introduced the MG5 in the summer of 2021. This BEV (Battery-Electric Vehicle) was aimed at regular families and provided the basic stuff for a no-nonsense automobile.

Its exterior design might be called bland, at most, with triangular scoops placed on the sides of the front lower bumper, pointed towards the car's center. While the front fascia didn't feature an upper grille, it sported a wider one on the apron since it didn't need it. Its narrow headlights featured LED lamps. From its sides, the waved beltline started from the front fenders and went all the way to the taillights. Since the car had the battery pack installed in the floor, it forced the designers to raise the cabin, leading to a taller cabin, providing a crossover stance for the MG5.

Inside, the carmaker placed a TFT display in front of the driver for the main instrument cluster. An infotainment system with an eight-inch touchscreen atop the center stack. A gear selector sat between the front seats on the center console. It allows the driver to use different settings for the driving mode, including a one-pedal way. 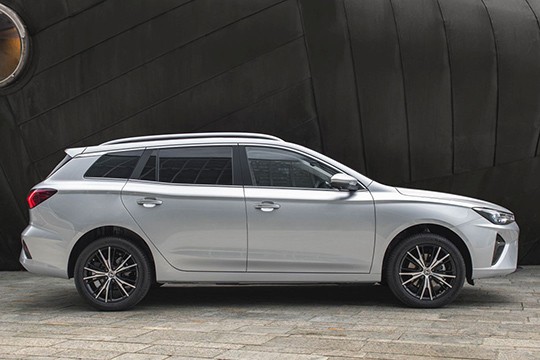 1 MG4 EV Will Arrive in the UK in September: Check Out the RHD Version Here

2 MG Will Avoid Problems With Disney: Mulan To Be Called MG4 Electric in Europe

3 Disney May Ask SAIC for a Cut in MG's Newest EV, the Mulan

4 1979 MGB Features Mopar Surprise in the Trunk and No Common Sense, That's Why We Love It

5 The MG ZS Electric SUV is a Sales Bonanza in Europe, Americans Should Be Jealous