Although the MG brand was no longer produced in Longbridge, Birmingham in the U.K., the name still had a very profound sound in British automotive history. But the MG3 was made in China.

When the world economic crisis struck in 2007, some glorious brands ceased to exist and others were bought by foreign companies. MG-Rover group was purchased by SAIC, a Chinese state-owned automotive company. When it did the acquisition, only the MG name was sold. The Rover brand was kept by Jaguar-Land Rover, who was bought by Tata Motors, an Indian company.

The first generation of the MG3 was a Rover Streetwise with a different badge on it. The second generation was introduced in 2013 and it was developed on that platform, which was the same for the Rover 25 and it was based on an older Honda platform. Its styling was more angular, with sculptured doors and sharp-looking headlights. The mesh-grille and the front bumper had an aggressive style.

The cabin was a completely new design with a big infotainment system on the center stack. It had an Apple CarPlay and Android Auto compatibility. The instrument cluster still had some design cues that resembled the older MG brand. Being a supermini vehicle, it offered limited room for the rear seats, but it was just like the other supermini on the market.

Under the hood, there was an updated version of the older 1.5-liter gasoline engine from General Motors. It didn't feature direct fuel injection or light pressure turbo. It was an old-school, chain-driven unit that produced 105 hp. 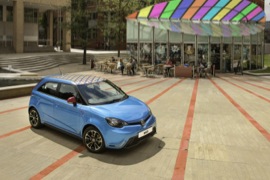