MG introduced the Marvel R electric vehicle in 2021 as a new model in its lineup and presented it as the first full-electric station wagon on the market.

The former British brand MG ended up in the Nanjing Automobile Group in 2006 and later, which merged into SAIC in 2007. But the respectable, century-old brand was revived and developed new products. In 2021, MG introduced the MG Marvel R Electric as the company's first electric station wagon. Previously, the carmaker offered two other electric vehicles, named MG5EV and MG ZS EV.

With the Marvel R, the company opened a new chapter in its lineup. MG built the C-segment lifestyle SUV on a new platform. While it showed more like a crossover or a raised station wagon, the Marvel R aimed at European customers, not only at the British ones. The designers deleted the grille at the front and installed a panel under the LED strip used as a daytime running light. Two side scoops hosted the fog lights in the bumper, while the headlights showed a C-letter pattern on top of the fenders. Its waved, ascending beltline connected the front and rear lamps and formed a shoulder line over the rear wheel-arches. The arrow-like taillights pointed toward the car's center were connected via a horizontal red light strip in the back.

Inside, the carmaker installed a big, 19.4" touch-screen as a center stack, with a few physical buttons at the bottom and a 12.3" digital instrument panel.

The Marvel R was powered by three electric motors: one at the front and two in the rear, which offered 288 hp. Depending on the car's configuration, it provided a WLTP range of 400 km. The base version featured just two electric motors for the rear axle. 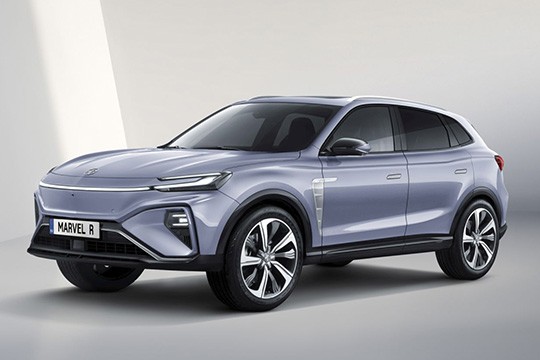 1 MG Will Avoid Problems With Disney: Mulan To Be Called MG4 Electric in Europe

2 Disney May Ask SAIC for a Cut in MG's Newest EV, the Mulan

3 1979 MGB Features Mopar Surprise in the Trunk and No Common Sense, That's Why We Love It

4 The MG ZS Electric SUV is a Sales Bonanza in Europe, Americans Should Be Jealous

5 Liverpool FC Star Thiago Alcantara Gets a New MG ZS EV, but Will He Actually Drive It?