After resurrecting the MG brand and then moving the entire company's production from Longbridge, the UK, to China and Thailand, the Chinese owners of the iconic British carmaker have started to revamp its entire lineup.

As it happens, the MG HS will be marketed as the flagship model for the entire brand, despite being a compact crossover that costs less or about as much as a Volkswagen Golf with similar features.

The HS has three trim levels, all being powered by MG's new 162-horsepower turbocharged gasoline engine. The entry-level is called the HS Explore, the mid-range is the HS Excite and the top model is uneventfully called HS Exclusive. All of them are available as standard with a six-speed manual gearbox, with a 7-speed double-clutch transmission being optionally available on the Excite and Exclusive trim levels. Even the base version comes well-enough equipped, with a 10.1 inches touchscreen with Apple CarPlay and Android Auto being available as standard, among other comforts, such as electrically folding and heated door mirrors, keyless entry with push-button start and various active safety features. The MG HS Exclusive versions equipped with a dual-clutch transmission also include a hilariously named "Super Sport" button on the steering wheel, which simply puts the car into Sports mode and changes the interior ambient lighting to red. 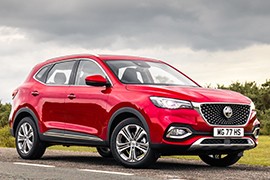