Launched as part of GM's statement of having gotten back into business in 1992 and the success registered by parent company BMW's Z3 model, the F model was one fats car.

The car came with a choice of two engines displacing 1.8 L and delivering power outputs of 118 hp, for the regular K-Series 16V engine and 145 hp for the VVC version respectively. Besides the fortunate mix of performance and fuel economy, the car was equipped with a less known type of suspension, called Hydragas. The system comprises nitrogen gas-filled displacer units that replace that act as efficient replacements for the conventional steel springs. 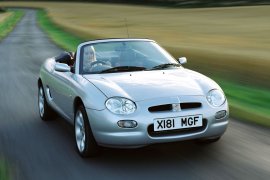