In 1992, Nissan and Ford Motor Corporation launched the Mercury Villager at the Chicago Auto Show.

Six years later, the Villager received a new generation to bump its sales.

While both General Motors and Chrysler already had a good start for the rising minivan market, Ford was lacking behind. At the same time, Nissan had a very good platform fit for building an MPV on it. By joining their forces, the result was the Mercury Villager. It wasn't the first jointly developed product by the Japanese and American companies.

The Villager was distinguished by its siblings due to its “waterfall” grille design, with vertical chromed bars. While sharing the wheelbase with its predecessor, the 1999 Villager was longer. Since it was considered as a premium version when compared to its Ford sibling, it was fitted as standard with two sliding doors. In the back, it featured the same corner-mounted taillights as the Nissan Quest, but with a red&amber molding on the tailgate. The rear window could have been opened independently from the tailgate.

The dashboard and the door panels received a two-tone design. To clear the path between the left and right side of the vehicle, the Villager kept the gear-selector mounted on the steering column. On the center stack, the car-maker installed the stereo and climate unit controls along with other storage compartments.

The Villager was based on the FWD platform from the Nissan Maxima. It also had a modified version of the 3.3-liter V6 engine from the medium-sized Japanese vehicle that was sold in the U.S. The only gearbox available was a Jatco 4-speed automatic. 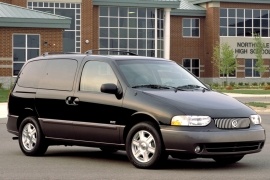