The fifth generation of the Mercury Sable tried to revive the commercial success from its predecessors.

It was built on the same platform with the Ford Five Hundred and Ford Taurus.

The first generation of the Mercury Sable was well received and few more years after, it was still on the customer's wishlist due to its amenities that looked better than on the more common Ford Taurus.

On the outside, the vertical slats of the grille and extended headlights over the hood made a better impression on the customers. Even if the Mercury was not a luxury brand, its appearance was closer to the premium-segment than to the mass-market. Sable's distinctive LED taillamps featured a predominantly white lens with red accent stripes. The new rear fascia had a cutout for the chrome-tips on the dual exhaust system. A chrome strip on the bottom edge of the deck lid provides a finishing touch.

Inside, there was an airy interior, with two-tone trims with different accents. It was available with a choice of high-gloss accents that resembled carbon-fiber or two wood grain accents: Guitar Maple or San Macassar. The Sable featured standard cloth seats, while the upper trim level Premier Series offered a two-tone leather.

For the engine compartment, the Sable was fitted with the same 3.5-liter V6 engine from Ford, mated to a six-speed automatic fitted as standard. 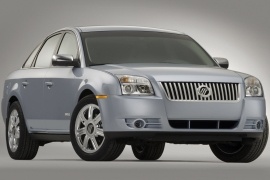