The 2006 Mercury Milan was introduced at the Chicago Auto Show in 2005 and it was a re-badged American Ford Fusion.

It's CD3 platform was shared with the Mazda 6 and the Lincoln Zephyr.

Mercury was trying to get back into the premium segment and, in 2005, it unveiled the modern Milan. While the name was inspired by the Italian city, the design did not cross the Atlantic with it. Some parts of the car were carried over from the Fusion, while some others were new.

On the outside, the headlights resembled the European Ford Fiesta. The grille, like a cascade, featured vertical slats and chromed bars. From the side, the long vehicle featured massive overhangs both front, and rear. In the back, the taillights crossed the body from the quarter panels to the trunk lid, but they still looked too small for the size of the car. The dual exhaust was peeking underneath the bumper.

Inside, Mercury tried to make it up with better features. It offered as standard a 6-CD/MP3 player on the center stack. The electrically adjustable driver's seat was designed for comfort. The instrument cluster resembled the one found on the European Ford Mondeo. In the back, there was sufficient room for two adults.
Under the hood, the Milan was available with a 2.3-liter inline-four and a 3.0-liter V6. The standard gearbox was a 5-speed for the former and a 6 automatic for the later. 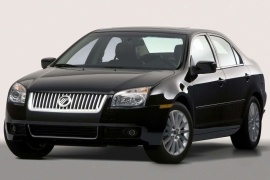