Launched in 2005 on the same platform with the Ford Escape and Mazda Tribute, the Mariner was marketed as a premium product in the compact SUV segment.

A year later, it was enhanced with a small facelift as a 2007 model.

The Mariner featured more amenities than its Ford and Mazda siblings. Since it was considered as a premium brand, some of its options were not offered for the other two vehicles built on the same platform with it.

On the outside, there were some visual enhancements to the car. The new satin signature waterfall grille was bolder than the one found on the non-facelifted version. Changes were made to the headlights as well. There were a new hood and a raised beltline. The B-pillar was covered with a blackout molding. In the back, the tailgate was redesigned and the taillights featured a clear-glass design over the lamps.

Like its non-facelifted brother, the Mariner was fitted as standard, on the base trim level, with a front-wheel-drive system. For the entry-level, it was fitted with a 2.3-liter engine paired with a 4-speed automatic. The other engine available was a 3.0-liter that offered 200 hp, the same as the 2005 model. It was mated as standard to a 6-speed auto and it was available with front- or all-wheel-drive. A 153 hp hybrid version was on the offer as well. 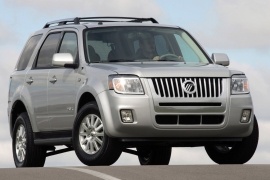 4 1963 Mercury Monterey Is a Rare Survivor With a Cool Feature, Also Pretty in Pink