Mercury introduced a so-called fourth generation of the Grand Marquis in 2002, but it was more of a restyling of the previous 1998 generation.

While it wasn't as famous as its sibling, Ford Crown Victoria, the Grand Marquis was designed as a much more luxurious model. Moreover, this generation overtook its sibling, the Cougar, in terms of Mercury's longest production nameplate. This achievement was possible thanks to the Grand Marquis's many qualities.

There was no denying that the overall car's look was outdated. Still, its classic design seemed to reach traditional customers who didn't like the new-edge design trend or some other futuristic approaches of carmakers. It featured horizontal, squared headlights that flanked a slightly taller, chromed radiator grille with vertical slats. The corner-mounted turn signals featured a smaller amber lens placed horizontally at the bottom instead of its predecessor's usual, tall ones. At the back, the chromed slat mounted on the lower side of the taillights was deleted. Instead, Mercury kept the chromed trim on the side cladding and on the bumpers for specific trim levels.

Inside, the dashboard sported a slightly curved upper side covering the instrument cluster and the stereo. At the same time, the climate control panel was placed lower on the center stack. Mercury didn't want to completely ditch the bench seat for the front occupants. Still, it offered an option for two extra-wide seats that formed a bench, with the only difference that these two sides could have been controlled independently.

Ford placed the same modular 4.6-liter V8 engine as before, but it made it available in two versions: 224 hp and 239 hp. The latter was for export markets, and both were paired to a four-speed automatic transmission. 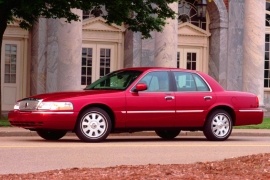