The S-Class was one of the premium vehicles that made the customers come again and ask for the new model.

It was like an iPhone in the car industry.

Nine out of ten customers bought the S-Class in the long-wheelbase version. Around 80% of the Western European customers and 70% from the U.S. owners returned for the new version. That loyalty rate was a satisfaction proof hard to get by many other brands.

The 2020 model was not as much about the outside as it was for the comfort and safety features. Still, Mercedes-Benz couldn't let a facelifted model without exterior changes. The new headlights and the front bumpers were slightly improved over the non-facelifted version.

The interior was the one that gets more attention. The virtual reality came on-board in HUD, which virtually draws lines on the tarmac to follow the sat-nav directions. The MBUX (Mercedes-Benz User Experience) infotainment unit featured up to five screens with OLED technology. The voice commands didn't require the "Hey Mercedes" to activate it for all the functions. For instance, to answer the phone, the driver just had to say, "Answer."

A major improvement was the rear-axle steering, which reduced the turning circle by 6.2 feet (1.88 m) in diameter. The new 48v architecture allowed the car to be fitted with mild-hybrid technologies for most of the engines, including a V8 with an integrated starter-generator. The base version was powered by an inline-six turbocharged engine with direct fuel injection that provided 362 hp sent to the rear of the all-four wheels via a 9-speed automatic (dual-clutch) gearbox. 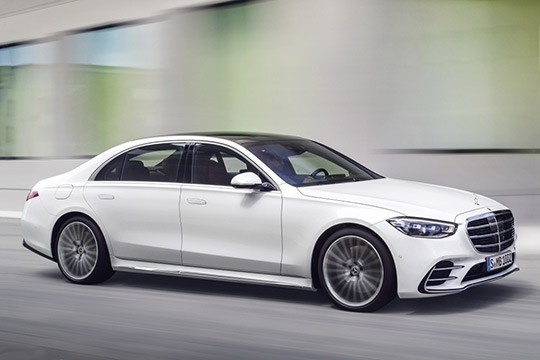