2 From Lifestyle Status Symbol to Lifesaving Utilitarian: The 1937 Mercedes-Benz Typ 320

It wasn't too much to understand that Mercedes-Benz will built an AMG63 once it was installed in other cars from the same brand.

Mercedes unveiled the brand new M-Class at the 2011 Frankfurt Motor Show, a vehicle that underpinned a number of other crossovers. Ahead of the motor show debut, Mercedes has released a number of photos showing the lines of the ML 63 AMG, as well as the preliminary technical details. The big news is that that it will use the fresh 5.5-liter V8 twin-turbo which offers 518 hp and 700 (516 lb-ft) of torque. Instead of focusing on massive power increases (the new generation only bring 15 hp more), the AMG gets much better mileage, improved by 33 percent.

However, you can’t call it slow either, because the ML63 AMG with the AMG Performance package can do 0 to 100 kph (62 mph) in just 4.7 seconds, which matched with the top speed of 155 mph or 250 km/h (electronically limited), is quite impressive. Part of Mercedes-Benz's new naming scheme, the ML 63 AMG became the GLE 63 of Mercedes-AMG in 2015.

The transmission is an AMG Speedshift Plus 7G-Tronic and sends the power to the all four wheels via the 4Matic system. The driver has the option of changing the gears by himself via the paddles behind the steering wheel. 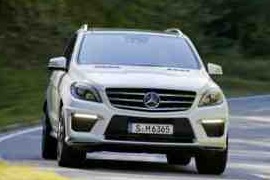