The horsepower war extended on all classes and all sizes, and Mercedes-AMG built the GLC 43 with one purpose: to deliver sports car performance in a compact SUV package.

Competing against Porsche Macan and BMW X3 M, Mercedes-AMG worked on the GLC SUV to enhance its performances. The result was a powerful vehicle that could rocket from zero to 60 in less than five seconds. But that wasn't all about the compact, premium car.

Compared with its non-AMG sibling built by Mercedes-Benz, the AMG 43 featured a new front fascia with a single-slat chromed bar on the 3D pattern design grille. Its front bumper was different and sported the more comprehensive, A-shaped signature lower mesh-grille from AMG, while the side scoops received two horizontal slats. On its sides, the GLC 43 revealed a set of high-gloss, high-sheen 19" alloy wheels with a twin-spoke design. At the back, on the lower side, four squared exhausts completed the AMG package.

Inside, the GLC 43 featured high-bolstered sport bucket seats at the front with black, ARTICO artificial leather and microfiber, and red, contrast stitching. At the back, the bench for three received the same treatment. In addition, as part of the AMG package, the carmaker added red seatbelts for all five occupants.

Under the hood, AMG installed a twin-turbo V-6 engine that provided 367 hp delivered to all four corners via a 9-speed automatic transmission. The air suspension contributed to increasing the cornering speed. In addition, the GLC 43 fuel efficiency was improved by a cylinder deactivation system. 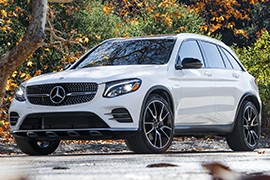