The G5’s predecessor, the Mercedes 170VL (W139) was an unsuccessful model, thus Mercedes decided to develop the G5.

The G5, also named the W152, was an off-road vehicle built for military and civilian purposes. It was built by Daimler-Benz and started production in 1937.
The upgrade included an increased wheelbase as well as a slightly modified grille design. The car received a 2006 cmc engine developing 45 hp and the car reached a maximum speed of 85 km/h in normal operation. When the all-wheel-steering was used, the maximum speed was at 30 km/h.
The power was transmitted to all four wheels through a 5-speed manual transmission. The car had hydraulic brakes on all four wheels.
The G5 was by 600 kg heavier than its predecessor and only allowed a payload of 270 kg instead of 500 kg allowed with the older models.
Unfortunately, the G5 was not as successful as expected and did not raise military interest, therefore Mercedes decided to present the car to the public in 1938.
The cars could accommodate up to 4-5 passengers and were built with various body styles depending on the buyer's specifications. Enjoying a popularity comparable to that of the G-Klasse, special G5 models were available under different names such as the typ Bergwacht (for mountain rescuers), Kolonial (colonial car) and Jagdwagen (hunting vehicle). Military versions were produced as well with a reinforced body with removable steel doors. 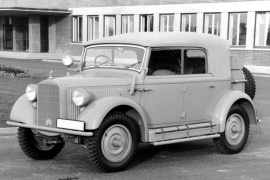