After WWI, Germany was denied to develop military vehicles, but some researches could still be made, and such was the situation with the Mercedes-Benz G1.

At the beginning of the '20s, there was a high demand for trucks of all sizes. Mercedes-Benz started researching for a new vehicle, able to cope with off-road and uneven terrain. It was the first step toward a vehicle that was suitable for the trucking companies and the army as well.

There were allegedly seven Mercedes-Benz G1 vehicle built by the German carmaker. It was more of a study to find out if that kind of vehicle would be suitable for off-road use. In the '20s, the Autobahn network didn't exist yet and most of Germany's roads were unpaved. The vehicle featured a high ground clearance, two axles in the rear equipped with twin wheels. It was a very good base for a truck.

The prototypes were designed to carry up to six passengers, although the twin rear-wheels might suggest the ability to carry heavier bodyworks (i.e. armored). It was used in some military exercises. Soon after, the concept vehicles were taken back and the carmaker started a new development, for a better vehicle, the G4. The G1 never went into production.

It featured a simple layout with an inline-six engine that offered just 50 hp. Its on-road performance was limited due to the tires performance. 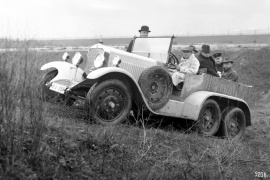