The 2018 Mercedes-Benz G-Class was not a new generation for the famous off-road vehicle. It was a completely new book that changed the whole concept of the vehicle.

For almost four decades, the Mercedes-Benz G-Class (or G-Wagon) was the same rugged vehicle, with a ladder-chassis and solid axles front and rear. Over the years, some of its characteristics were improved. The basic, cloth, the interior was changed to exclusive leather. The 4-speed manual was upgraded up to a 7-speed automatic with dual-clutch and the four-banger with a carburetor was replaced to state-of-the-art V8 with direct injection and twin-turbo. But the ladder-chassis was the same. The solid axles were still in place and the three lockable differentials were installed as well.

In January 2018 the new G-Class was shown at the North-American International Auto Show in Detroit. The new G-Class was 121 mm (4.8") wider, 53 mm (2") longer and 39 mm (1.5") taller. The increase in the ground clearance was a mere 6 mm (0.23"). But there was a new ladder-type frame and a double-wishbone suspension on the front. The rear axle was kept, but with a different type of connection to the chassis. The three lockable differentials were kept and the low-gear transfer box as well.

And so, the 2018 G-Class succeeded to bring more comfort and still the same off-road abilities as the older version. At the time of launch, there were three engines available: two gasoline units and a brand new inline-six turbodiesel. These were mated to a 9-speed Speedhift MCT transmission. 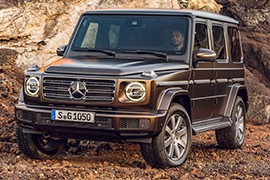