With the 2023 Mercedes-Benz EQS SUV, the German carmaker was one step closer to its goal of producing exclusively electric vehicles starting in 2039.

Designed as a flagship SUV model for the carmaker, the EQS shared its architecture with the EQS Salon, sharing the same wheelbase. Still, it was over 20 cm (7.9”) taller. Mercedes-Benz also said that the production was completely CO2 neutral, which made the vehicle more appealing to environmentalists around the world. Last but not least, thanks to its performance, it was also interesting for those looking for a fast SUV.

The front fascia followed the same design language as the EQS sedan, with a black panel instead of the main grille that sported the three-pointed-star chromed badge. In addition, an LED daytime running light stripe crossed the upper side of the front section from one headlamp to the other. At the same time, the bumper sported a lower A-shaped grille flanked by two side-scoops. These elements were needed to cool the battery pack and the front rotors, respectively. Overall, the EQS SUV resembled the GLS, its internal combustion-powered cousin.

Inside, the carmaker placed the same three-touchscreens design as in the EQS Sedan: one for the instrument panel, one on the center stack for the infotainment unit, and the third display in front of the passenger. At the back, the carmaker provided plenty of room for three passengers. Moreover, the trunk could hold up to four golf bags.

Mercedes-Benz offered the SUV with a choice of electric motors and two different transmission versions: rear or all-wheel drive. The base version received a rear motor only. At the same time, the top performer got two more powerful motors that sent their torque in all corners. 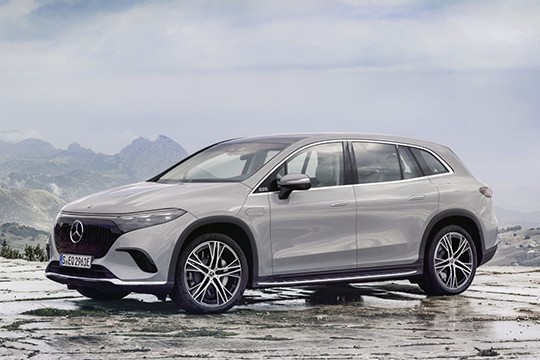