The electric-car frenzy caught the big German carmaker and introduced an electric luxury vehicle on the market in 2021: the EQS.

With more and more carmakers joining the electric revolution, Mercedes-Benz couldn’t just sit and wait to see what will go next, and it developed a completely new car in its lineup: the EQS. It started with a blank sheet of paper and moved forward until it made one of the most luxurious electric cars on the market.

With a drag resistance of just 0.20, it was the most aerodynamic production car in the world to that date. Despite its size and height, it could cut through the air seamlessly. At the front, the car featured a closed upper grille and a lower grille with shutters needed to cool the batteries and the electrical system. A pair of side-scoops adorned with horizontal slats completed the elegant yet aggressive look of the front fascia. The extended greenhouse connected the A-pillars to the D-pillars with an arch towards the rear taillights. Strangely though, the EQS featured physical rear-view mirrors while other carmakers already replaced them with rear-view cameras.

Inside, the main attraction was the dashboard fitted with three large screens: one in front of the driver, one in front of the front passenger, and the third one filling the center stack. In addition, the driver has a new steering wheel with buttons incorporated on the rim instead of the spokes. Thanks to the big wheelbase, the rear passengers could enjoy plenty of legroom and enough headroom due to the extended roof.

The powertrain offered a rear motor (eATS) for the base model or dual motors for the 4Matic version. 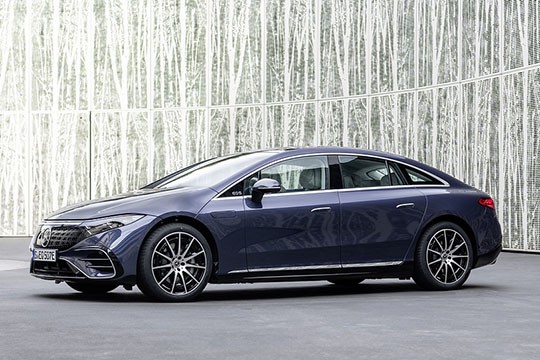