The electric revolution in the automotive industry caught the most important carmakers in the world, and the Mercedes-Benz EQA was a fine example of it.

Some would know that electric cars covered more than half of the market at the beginning of the XXth century. The internal combustion vehicles slowly and surely gained more terrain and ended up crushing the small electric car makers. After Tesla introduced the Roadster in 2008, the electric cars returned in full force and caught the big carmakers off-guard. They didn't have the speed reaction to fight back. But when they did, they did it in style like the 2021 Mercedes-Benz EQA, which was more than an electric vehicle; it was an SUV, and the SUVs were very trendy.

The large black plastic panel that replaced the traditional grille hosted the three-pointed silver star badge of the German carmaker from the front. Its headlights and DRLs were full-LED, while the aerodynamically profiled bumper helped in cooling the batteries and the front brakes. The car's overall shape was similar to the Mercedes-Benz GLA, with which it shared the same platform. In the rear, the LED taillights were connected via a red LED strip over the tailgate.

Inside, Mercedes-Benz focused on comfort and technology. The higher seating position, typical for an SUV, ensured enough interior space for up to five passengers. Its comprehensive digital dashboard and the MBUX infotainment system filled the second part of the job. All the vehicles featured standard the Mercedes Me App, which allowed them to control various car functions even when they were not inside or near it, via an Internet connection. 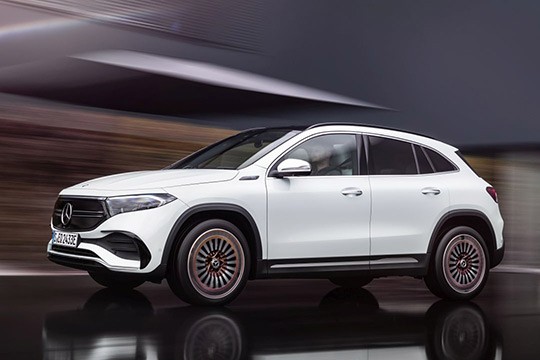