When the E-Class coupe lost its head and placed a canvas-top, it became an E-Class convertible, one of the sexiest cars in the executive-car category.

Ever since 1953, before even the E-Class had that name, the luxurious Mercedes-Benz range was well received by the market. Each time a new generation was introduced, it was a benchmark for its class. The first generation to receive the E-Class badge was the facelifted, 1993, W124 model. The 2020 model was the facelifted version for the fifth generation, which stormed the showrooms in 2017.

Mercedes-Benz introduced the facelift in 2020 with a new set of LED headlights and flatter housings. The diamond-style, 3D design of the grille was enhanced, and the A-shaped lower grille design of the apron amplified the dynamic style. Two powerdomes on the hood evoked a V engine, even if some models received inline-four units. The new LED taillights design and the chromed splitter made the car looks sportier. The canvas-top remained unchanged.

The interior received a new technological update for the infotainment unit with the MBUX system. It was fitted with two 10.25" screens arranged side by side under the same glass-panel. There was an even bigger, 2x12.3" screen option. The new steering wheel with capacitive touch-areas to control various systems installed on the car enhanced the driving experience.

To lower the emissions, the four-cylinder engine received an integrated starter-generator (ISG) and a 48v architecture. A recuperation function and the ability to "glide" with the engine switched off made the engine even more efficient. The electrification continued on all the gasoline engines as well, and the only gearbox available for the entire range was the 9G-Tronic (dual-clutch) automatic. 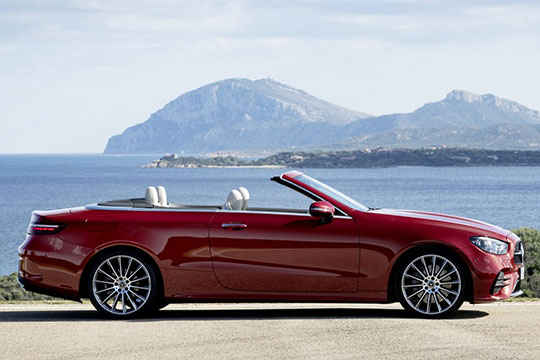