Mercedes-Benz introduced both body versions for the fifth generation of its C-Class range in 2021, and the station-wagon looked more dynamic than before.

The premium German carmaker had a long history with station wagons, and it didn't want to drove them away from the assembly line as long as the customers respected it. It didn't have to. All it had to do was to improve them continuously along with the rest of the range. While its predecessors looked more like family wagons, the 2021 model took a different, sportier approach.

Thanks to its long front end, the C-Class looked sportier than before. That change appeared for the first time on the fourth generation, W205/S205. Then, Mercedes-Benz decided to continue the trend and adopted the same idea on the W206/S206 lineup. Its arched, third side window looked closer to those used for on the CLA shooting-brake.

As usual, the T-model shared most of its parts with its sedan sibling. The carmaker installed the same dashboard with free-standing LCD screens. Customers have a choice between a 10.25" or a 12.3" version. On the center stack, Mercedes-Benz installed another big display tilted toward the driver for the infotainment system, with a standard 9.5" touch-screen and an option for an 11.9". Its trunk area was increased compared to its predecessor and reached 490 liters (17.3 cu-ft), which could have been extended up to 1510 liters (53.3 cu-ft) by completely folding down the 40/20/40 rear bench.

Under the hood, the C-Class S206 started its journey with a new engine lineup. Its downsizing process, combined with the electrification program, led to higher fuel-efficiencies for the entire lineup. At the new generation's start, the car received only automatic transmissions. 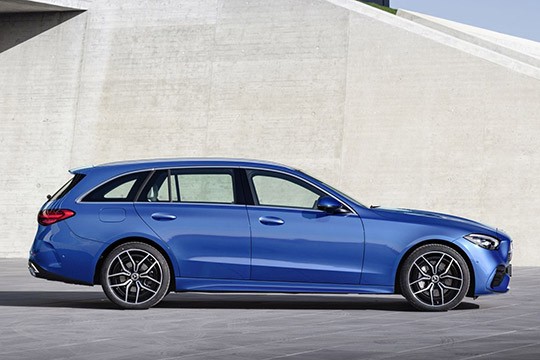