While the demand for crossovers and SUVs was still high, Mercedes-Benz tried to please its customers and added some ground clearance to the C-Class T-Model, transforming it into a vehicle able to cope with some unpaved roads.

With the C-Class All-Terrain, the German carmaker finally offered a match for their main competitor in the segment, the Audi A4 Allroad. At the same time, BMW didn’t have anything similar to offer. Of course, the C-Class All-Terrain was not an off-road vehicle. It was more of a station wagon on stilts with a set of scratch-resistant claddings around the bodywork.

At the front, the carmaker installed a new bumper than on the regular C-Class, with a black, trapezoidal cladding that mimicked an underbody shield. Also, the lower grille from the apron looked similar to those installed on other C-Class versions but with less cooling. From its sides, the higher ground clearance of the All-Terrain version was obvious. Also, the carmaker added scratch-resistant black rocker panels and overfenders. In the rear, the car sported a twin exhaust system under the bumper, flanking a plastic shield.

While the exterior tried to look tougher, the interior was typical C-Class, but with unique upholsteries available on the options list. The MBUX sloped infotainment system on the upper side of the center console. It completely replaced the traditional center stack while the vents were integrated into the dashboard. As for the instrument cluster, Mercedes-Benz installed a standard 10.25” with an option for a 12.3” virtual cockpit display. 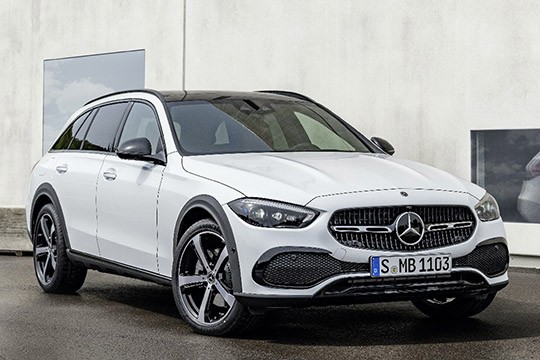