In 2021, Mercedes-Benz introduced the fifth-generation for one of its best-selling ranges, the C-Class, and pushed forward the company's electrification process.

While the world was still fighting against the pandemic situation, Mercedes-Benz had to push forward toward a cleaner future. Its new range was developed from the ground up and introduced advanced technologies such as rear-axle steering and, as a first for the C-Class, plug-in hybrid versions.

With its cab-rearward design proportion, the C-Class featured a longer front end when compared to its overall length. The A-pillars were sloped even more when compared to its predecessor, and the decklid was even shorter. Combined with the power-domes on the hood and the tear-shaped headlights, all these created a sportier appearance for the mid-size sedan. In the back, the LED taillights followed an aggressive design with sharp sides on the inboard section, which crossed from the quarter panels to the trunk lid.

Inside, the C-Class designers took their inspiration from the S-Class. They created a dashboard divided into an upper and lower section. There were new, flattened round vents reminiscent of aircraft engines. The driver area featured a high-resolution, free-standing LCD screen. Customers have a choice between a 10.25" or a 12.3" version. On the center stack, Mercedes-Benz installed another big display tilted toward the driver for the infotainment system, with a standard 9.5" touch-screen and an option for an 11.9".

Under the hood, the C-Class W206 started its journey with a new engine lineup. Its downsizing process, combined with the electrification program, led to higher fuel-efficiencies for the entire lineup. At the new generation's start, the car received only automatic transmissions and rear-wheel-drive systems. 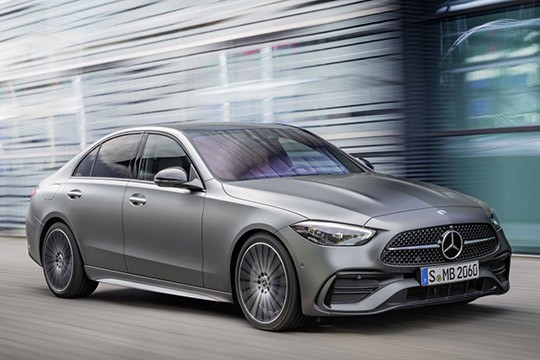