Designed as a city vehicle suit for five, and with a minivan stance, the B-class received a refresh in 2008 for the entire lineup.

Mercedes-Benzi introduced the B-Class in 2005 on the same platform as the A-Class, but the German carmaker had something else in mind: to develop the A as a compact hatchback/sedan and let the B be the little minivan. Starting with 2009, the Euro 5 pollution norms came into force, so Mercedes-Benz refreshed the B-Class a year earlier to have the entire range up and running.

Some modifications went for the exterior. The grille featured three thicker metallic gray slats, with the three-pointed star badge mounted in the middle. Much work was put into designing the bumper, with the parking sensors masked inside a rim that was extended from the lower area. There was a new taillights design in the back, with smaller reversing lights and only on the tailgate area.

Inside, Mercedes-Benz offered a new infotainment system, with a slightly different design of the center stack. Otherwise, the differences between the facelift and the non-facelift versions would be a difficult quest even for experts.

The big differences were under the hood, where the carmaker installed a new engine range. Some versions received a start/stop system to save fuel in city traffic. Depending on the chosen engine, Mercedes-Benz installed a 5- or 6-speed manual gearbox, while an automatic was on the options list. 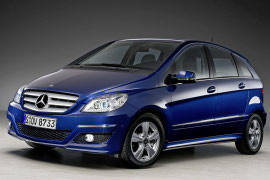 2 Remembering the Ice G-Wagon, the Coolest G-Class Tribute That Ever Was