Mercedes-Benz facelifted the third generation of the B-Class in 2022 and managed to keep its smallest minivan alive, even though it wasn't the most important segment of the market.

After Renault was highly successful with its Espace, and then with all the other minivans it built, other carmakers followed... and most of them failed. Mercedes-Benz tried that recipe, too, with the first generation of the A-Class in 1997, but eventually, that lineup morphed into a regular hatchback, and its place was taken by the B-Class, which was built on the same platform.

The third generation of the B-Class was launched in 2019, and due to the world pandemic and microchip shortages, it couldn't sell in high numbers. Yet, the automaker followed its plan and gave the car an enhanced version in 2022. On the outside, the most striking difference was on the headlights, especially on cars fitted with the optional LED ones. Other than that, there were hard to notice any differences.

Inside, the game of "spot the difference" continued. The B-Class featured the same air vents, and only as an option, the flat-bottom steering wheel that shouldn't be placed into a minivan in the first place. Yet, the screens used for the instrument panel and the infotainment system were larger and offered a crispier image than before, thanks to the enhanced MBAUX system.

But the most important upgrade was on the tech side, where the automaker upgraded the plug-in hybrid version for the B-Class. It featured a 15.6 kWh battery pack that could have been recharged at DC fast charging stations. In addition, the electric motor gained 5kW in power than on its predecessor, reaching 80 kW (107 hp). 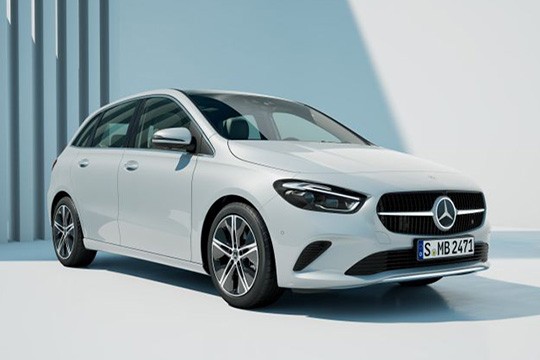