Based on the MFA2 platform, an evolution of the previous generation's architecture, the Mercedes-Benz B-Class W247 brings a number of improvements over its predecessor.

More interior space for both passengers and their luggage, alongside an all-new engine lineup and the MBUX infotainment system should make the new car get back to its leading position in the European compact MPV segment.

Partly responsible of the increased interior space is the longer wheelbase, but also the complete redesign of the dash, which can now feature up to two widescreen displays in various sizes, depending on the options fitted to the car. All engines are new and Euro 6d-compliant, with the OM 654q 2.0-liter diesel making its premiere in a transversal layout. At first, two gasoline and three diesel versions will be available, all of them paired as standard with a 7-speed dual-clutch transmission, with the 150- and 190-horsepower diesels transmitting their power to the front wheel through a brand new 8-speed dual-clutch. 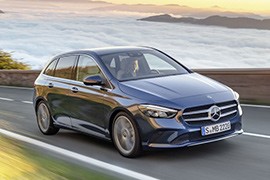 2 New Mercedes-Benz E-Class Estate Spied, Looks Like an Elegant Evolution of Its Predecessor