1 2024 Mercedes-Benz eSprinter Debuts, Will Be Sold in the U.S. in Its Biggest Form

2 Ozuna Is the Epitome of Irony, Claims You Can’t Buy “Swag” While Posing With a Luxury Car

Mercedes-Benz introduced the 600 lineup at the 1963 Frankfurt International Motor Show and immediately got enough attention from state officials around the world and wealthy businessmen as well.

Even though the four-door sedan was already appreciated for its qualities, Mercedes-Benz saved the best for last, and, in the following year, the automaker unveiled the more extended version of the 600, aptly named Pullman. It was the most luxurious vehicle available and also the priciest one. Even an optioned-out Rolls-Royce was more affordable than this state limousine. The wheelbase was longer than many other regular cars.

The team that designed the vehicle was formed by some of the most prestigious Mercedes-Benz designers: Friedrich Geiger (the man who created the 500K), Paul Bracq (who designed the SL), and Bruno Sacco. It featured a tall stance, six doors, and a generous glass area for the greenhouse. At the front, the narrow, vertical headlights resembled those installed on its siblings. For the U.S. market, due to regulations, these had to be round, spoiling the magnificent look of the car.

Inside, the eight seats were primarily designed for comfort, and there were two jump-seats facing rearward, in front of the latest row, for translators. Moreover, an intercom system allowed the rear passengers to talk to the driver.

The car featured hydraulically adjustable dampers. At the same time, the pneumatic system controlled the door locks, windows, and even seat adjustments, and even the trunk lid closing. In addition, the brakes were with air, like on heavy trucks.

Under the hood, there was a 6.3-liter V8 engine with a fuel injection system. The automatic transmission was designed to offer the best comfort when changing gears. But still, the car could go over 200 kph (120 mph). The carmaker produced the Pullman until 1981, and a total of 124 units were made in this 6-door configuration. 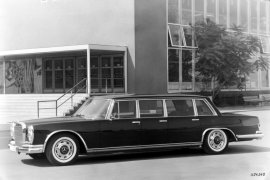