While its predecessors were designed by Mercedes-Benz, the 2022 model-year, R231, was developed from the ground up by MB's motorsport division, Mercedes-AMG.

After almost seven decades on the market, the SL became one of the best-known products from Mercedes-Benz. But all those times, it was mainly a GT and less of a sports car. The R231 promised to change all that. When AMG designed the car, it started with a blank sheet of paper. The only known attributes were the engine and the gearbox.

To save some weight, AMG made the car with a retractable soft-top instead of the metallic one used on the previous generation. In addition, the long wheelbase and short overhangs were needed for better high-speed cornering behavior. A Panamericana grille with vertical slats and the three-pointed-star badge in the middle confirmed the AMG status. In the lower part of the bumper, the carmaker placed e set of air scoops, either for engine or brake-discs cooling.

The cockpit was a breathtaking view, with a blend of technology and keen attention to detail. For example, there were four turbine-style vents on the dashboard and a big infotainment screen for the MBUX system. For the driver, Mercedes-AMG installed a TFT display instead of analog dials and showed various information there to make their lives easier.

Like other SL generations, the R231 provided room for four occupants, with a set of seats in the back. Those were placed there primarily for tax-income reasons or for small bags or dogs since they couldn't accommodate passengers taller than 1.5 m (4.9 ft).

For the drivetrain, AMG planned two versions, both being all-wheel-drive. It is a novelty for the SL range, but it was a better choice since the base model provided 476 hp. 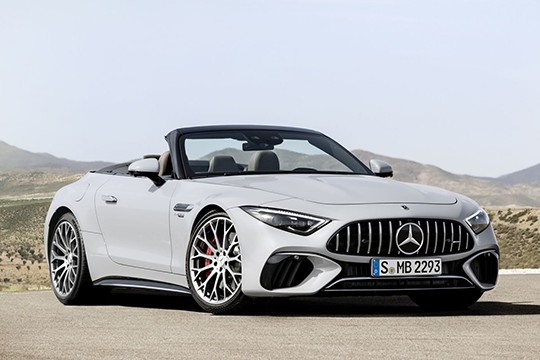