Since the separation of the AMG from the regular Mercedes-Benz models, the Affalterbach motorsport division started to offer faster cars for its customers.

The GT was one of its most important models.

In 2014, AMG launched its first product that was named AMG instead of Mercedes-Benz AMG. It was a car like no other in the Mercedes-Benz manufacturer lineup. The supercar was offered with the most powerful naturally aspirated engine on the market, at the time of its launch. In 2017 came the first facelift and, three years later, a new refresh for the lineup was introduced.

The 2020 model featured some exterior changes to enhance the look and the car's aerodynamic. The full-LED headlights became a standard feature and a new grille design was installed. The front bumper was divided into three main areas: the lower grille and the side-intakes. The latter was split in two by a horizontal slat. The back of the car was slightly improved, but the four exhaust pipes were left visible, poking out through the rear apron.

The interior featured a carbon-fiber trim on the center console and the dashboard. The instrument cluster was completely digital, with a 12.3” TFT color-display. An additional screen was placed on top of the center stack, for the infotainment system. It was controlled via voice commands, a touch-pad, or via the 10.3” touch-screen. The Apple CarPlay and the Android Auto integration was fitted as standard.

The 2020 AMG GT featured a twin-turbo V8 engine that offered 469 hp. The GT C variant received 550 hp and the top-spec GT R and GT R Pro received the 577 hp unit. All versions were paired to a 7-speed, dual-clutch, automatic transmission. Power went to the rear wheels and the gearbox was mounted in the back. 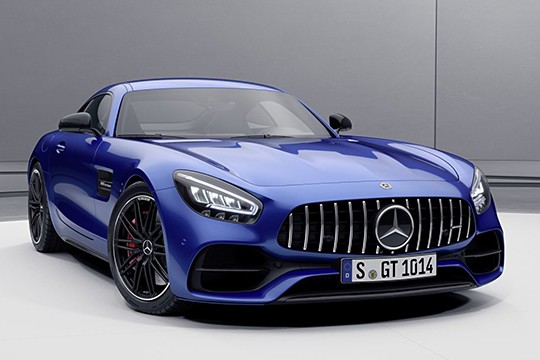