Based on the same platform as the Mercedes-Benz E-Class, the AMG-GT53 4 Matic+ was a four-door coupe made for fast lapping a track or just comfortably cruising on the Sunset Boulevard.

Since AMG became a separate brand of the Mercedes-Benz, it became more focused on particular products. Even though it shared some parts and underpinnings with the rest of the three-pointed-star brand, it had a few unique versions, such as the AMG GT and its four-door sibling. They didn't share the same platform, but the shape was the one that made them relatives.

Like any other Mercedes-AMG model, the car featured the Panamericana grille at the front with vertical slats. The bumper sported a lower apron with an A-shaped grille flanked by wide air-scoops. Just above the lip-spoiler at the bottom, the carmaker added a grille with closing louvers. As an option, the carmaker offered a V-8 powered look for the 53S version. The sloped-down greenhouse created a fastback-coupe look from its sides, even though there were two doors on each side. At the back, AMG installed a retractable wing on the tailgate.

Inside, AMG installed four individual bucket seats for all passengers. A center console crossed the car from front to back. At the front, the carmaker placed a digital instrument panel in front of the steering wheel and another screen on top of the center stack for the MBUX multimedia system. On the center console between the front occupants, the GT53 featured a slanted area for the gear-selector and buttons for the suspension and other driving modes.

Under the hood, AMG installed an inline-six engine helped by a supercharger, a turbocharger, and a small electric motor. Thus, the turbolag was non-existent. The 53S 4Matic+ sent the 435 hp in all corners via a nine-speed automatic gearbox. 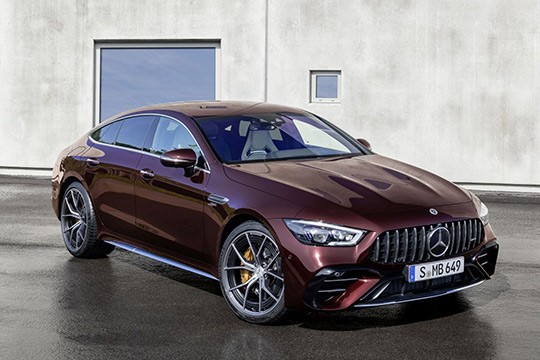