Mercedes-AMG proved that a big car could be as quick as a supercar, and it did that by holding five adults and a massive trunk behind them.

The German carmaker introduced the fourth generation of the GLE in 2018 at the Paris Motor Show, and, in March next year, its Mercedes-AMG division introduced the GLE 53 version at the Geneva Motor Show. But that wasn't all the things prepared by AMG for the big SUV Coupe. In 2020, it introduced the GLE63 version with or without an S behind it.

On the outside, the big SUV showed the typical Panamericana grille with chromed vertical slats. Its bumper sported an A-shaped lower grille flanked by two side scoops taller than other cars' wheels. A pair of powerdomes adorned the hood in front of the very raked windshield. The carmaker placed the V8 Biturbo chromed badges on the front fenders that warned the bystanders that this was not an ordinary vehicle. Its 22" light-alloy wheels filled the wheel-arches and let the red calipers be seen through them. In the back, four rectangular exhausts flanked the rear diffuser and completed the car's aggressive look.

Inside, AMG covered the digital dials and infotainment display with a glass panel and left the impression of a single unit. The piano-black trims from the regular Mercedes-Benz GLE coupe were gone, and a set of carbon-fiber decorations took their place. A pair of Alcantara or leather upholstered sport bucket-seats with high-bolstered areas offered enough side support for the front passengers. 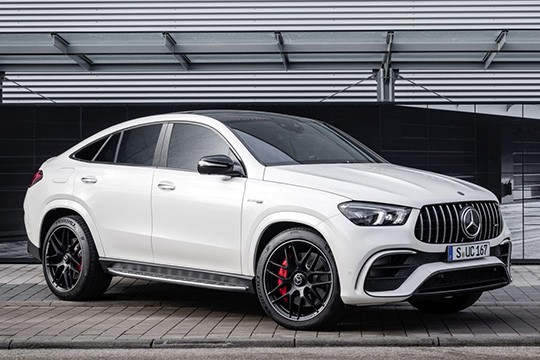