When Mercedes-Benz finally changed the G-Class after almost three decades on the market, it did it in style, and it added an AMG version.

The 2018 model G 63 AMG was longer, taller, and most importantly, wider than the former G-Class 63 AMG. It still relied on a body-on-frame construction but with a new chassis and a front, double-wishbone, independent suspension.

From the outside, the AMG treatment included the 12-slats Panamericana grille at the front. The standard, round, LED headlights resembled the older G-Class. Its flared wheel-arches widened the vehicle and covered the standard 20" light-alloy wheels. A set of aluminum side steps made the ingress and egress easier for all passengers, although the side-mounted double exhaust might ruin a dress or a suit. The car sported LED taillights, and a full-size spare wheel mounted on the side-hinged trunk door.

Inside, the carmaker created a luxurious interior with metallic buttons on the center stack and a sturdy center console with a large storage compartment. In front of the driver, the carmaker installed two screens under the same glass cover. The center display was for the infotainment MBUX system, while the one in front of the driver was for the instrument panel. A pair of sport bucket seats didn't look very appropriate for an off-road vehicle but provided good side support.

Underneath the squared-looking bodywork, AMG installed a 4.0-liter, twin-turbocharged V-8 engine that sent 585 hp to all wheels via a nine-speed automatic gearbox. Thanks to its standard three locking differentials and the low-range gear transfer case, the heavy vehicle was ready for any rough terrain. Also, for higher cornering speeds, the G 63 featured an Airmatic adaptive suspension. 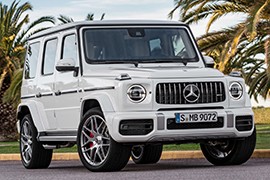