5 Armored and Stretched G-Wagen Puts the G in Gangsta

The electrification program for Mercedes-AMG continued with the introduction of the 2022 EQE SUV, unveiled in October 2022.

Since there was an increased demand for high-performance electric SUVs on the market, the German premium automaker felt obliged to create something and give a proper answer to the BMW iX or the Audi e-tron. Thus, the Mercedes-AMG EQE SUV provided enough room for a family, and it was quick enough to take on many sports cars.

With a front fascia that resembled the well-known Panamericana grille with vertical slats, the new electric SUV from the German automaker was keen to prove that it was worthy. In addition, the lower bumper that incorporated the A-shaped grille and the side scoops was a signature design for the AMG brand. Its profile revealed an elegant silhouette with a raked-forward rear windscreen. Finally, at the back, the LED taillights with a narrow design and a red light strip that crossed the tailgate created an upscale look. Last but not least, the automaker didn't even try to mimic exhausts in the rear apron.

Inside, the automaker stated that it used recycled and recyclable materials. Moreover, it used only man-made leather to create a nature-oriented design. The dashboard was similar to the EQE, featuring only displays for the instrument cluster, the infotainment system, and a third touchscreen for the side passenger. Thanks to the flat floor and the lack of a transmission tunnel, the EQE SUV provided plenty of room for five adults. Yet the split-folding bench in the back was profiled for two passengers.

The drivetrain was a marvel on its own, with a decoupling front motor system that allowed the vehicle to run on RWD mode only. Thus, the vehicle could travel on longer distances. 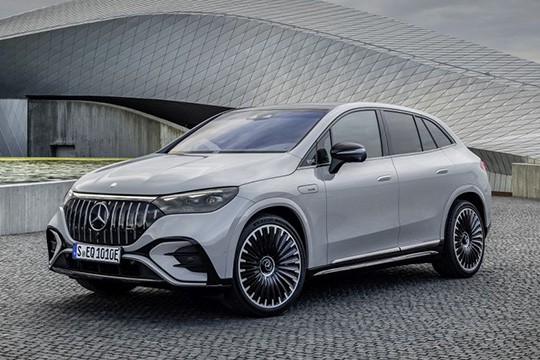